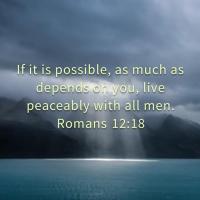 I believe the Bible is God’s Holy Word, without error. Therefore, I do not believe that God in any way ordained same-sex unions. I don’t believe in discrimination. I don’t believe in bullying. I don’t believe in violence against those that aren’t like us. I don’t believe any Christian can say with any certainty that there aren’t any homosexuals that have claimed Christ in heaven because we’ve never been and we don’t know who repented. My Bible doesn’t teach me that homosexuality is an unforgivable sin or a greater sin than others, but it does state that it is sin, along with many other things that we as humans do (Romans 1:18-32). Romans 3:23 states that all have sinned and fallen short of God’s glory, which means that we’re all guilty of something.

If someone isn’t of the Christian faith, I understand that they wouldn’t accept the Bible as their moral compass. I also understand that there are some that profess Christianity that don’t necessarily agree with all that is in the Bible. Again, that is their prerogative and I respect their right to feel however they feel. My Bible tells me that God never changes, thus, He hasn’t changed His mind about homosexuality or any other sin. If others disagree, again, that’s their prerogative and I respect their right to do as they please. However, these are my beliefs. I don’t expect everyone to share them. This is simply what I believe and I have a right to that belief, just as others have a right to disagree.

Since the Bible has been at the center of this discussion, the Bible is therefore appropriate to use in stating our position on the Supreme Court’s ruling in favor of same-sex marriages. Scripture says:

“If it is possible, as much as depends on you, live peaceably with all men. (‭Romans‬ ‭12‬:‭18‬ NKJV)”.

So, having said that, the best laws in any country are the ones that don’t cause anyone to go against their moral beliefs. Whether inside or outside of the Christian community, people are going to disagree, and from those disagreements, people should live their lives as they wish, within the law and without infringing on anyone else’s right to do the same. So live and let live isn’t the only order of the day here. Live your life and don’t force anyone else into your standard of living must also be adopted.

We have to move beyond the fallacy that tolerance must be accompanied by agreement. That would be nice, but it’s just not realistic (as many people have tolerated Christians for years, though they didn’t agree with them). Yes, we should love one another as God commanded, but we must also practice tolerance from BOTH SIDES, meaning respecting one’s right to live as they wish, along with respecting one’s right to respectfully and peacefully disagree, and not participate if they feel that strongly about it.

My Bible also commands me to love eveyone as God does, and I still do. No court ruling will change that. I must love this way because God loves me beyond what He disagrees with in my life. As long as a worldly law doesn’t oppress anyone, then we can all live with it. And oppression is in the mind of the beholder, so we shouldn’t try to figure out what is and isn’t oppressive to someone. As long as we allow one another to live according to their own morals, without EITHER SIDE trying to force what they believe down each other’s throats (and BOTH sides are guilty of this), we can more than accomplish the tenets of Romans 12:18: To live peaceably with one another. This is my prayer.

May God bless and keep you all.

2 thoughts on “Our statement on the marriage equality ruling”